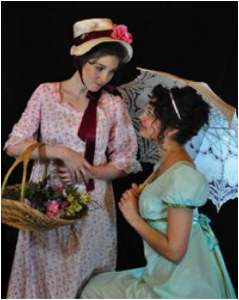 “Stolen Shakespeare Guild’s production of Emma, based on the1815 Jane Austen novel about a lovable but meddlesome flibbertigibbet who routinely misses when she aims Cupid’s arrows at the hearts of others, succeeds on many levels thanks to a good cast and its respect for its source.”

“This production, based on an adaptation by Jon Jory and directed by Illana Stein, does a fine job of capturing the tone and textures of Austen’s times and characters.”

“Janelle Lutz is extremely steady in the title role. She captures the single-mindedness of her character well. John Tillman is also strong as Mr. Knightly, bringing the proper bearing to his part as pretty much the only stable and rational person in the show. Michael Shane Hurst is especially Austenesque as Mr. Elton, with an accent and host of affectations that suit the material perfectly. And Hazel Murphy is a comic delight as the ever-flustered Miss Bates.”

“Stein’s direction is sprinkled with clever bits of staging, and the pace is brisk enough that the show does not overstay its welcome.”

“exceedingly pleasant and true to its source” 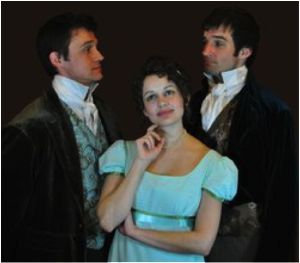 “The single stage setting served both as the streets of Highbury and several residences. The design of the hanging picture frames in order to introduce characters was a wonderful idea. As Emma and Mr. Knightly discussed the inhabitants of Highbury, the residents would appear and pose within the picture frames. It was an ingenious way engaging the audience.”

“The actors did a phenomenal job in their performances.”

“If you are a fan of Jane Austen and solid theater performance you should catch this play. It’s a shame this play has a very limited performance schedule. Everyone should see it at least once.” 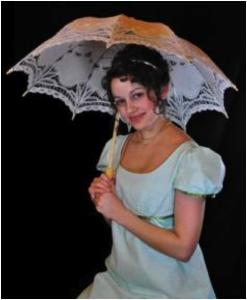 “Lutz fills the role of Emma admirably, all at once being repulsively meddling and inwardly sweet. She really is able to find a good balance…Playing opposite her as Mr. Knightly, John Tillman is all the things a romantic lead Englishman should be: dashing, debonair, handsome. He’s an apt leading man.”

“The supporting cast impresses…particularly the more elderly roles of Delmar H. Dolbier as Emma’s father and Hazel Murphy as Miss Bates. Both bring enough idiosyncratic quirks—Murphy with her breathlessly stuttering delivery and Dolbier with his general boisterousness…”