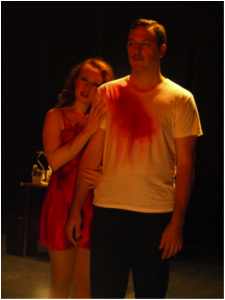 New Edgecliff Theatre’s contribution to the 2011 Fringe Festival, Catie O’Keefe’s Darker, has an enticing ambiance (at Know Theatre). The sparse set features a number of bare light bulbs that at times are blindingly bright and at others pulsing or dim. The effect is garish and mesmerizing, appropriate for a play with themes like anger, unrequited love and lost memory.

Max, carefully brought to life by Michael Carr, arrives in the drab and poorly lit office building of a light bulb manufacturer to start a new job he did not apply for. He is quickly given a desk by his bewitching boss Lucy, played by a very sultry Mindy Heithaus. Max immediately feels as though he’s missing something, that he’s been here before — he wonders if he’s “déjà-vuing.” Lucy and their third office mate, Tom (Jeffrey C. Miller), whose desk Max usurps, are hiding something.

All three actors are capable and watchable. And they are well-cast, appearing comfortable in their roles and clear on their wants. But the script seems to limit each of them to just one or two notes emotionally. Max is confused as he struggles to resurrect his memory. Tom is nervous and a little desperate, dropping cryptic hints about Max’s past, and Lucy sheds her clothing, obsessed with a man who doesn’t love her back.

Well-acted and suitably eerie, Darker lays the questions on thick and withholds the answers until the very final moments. 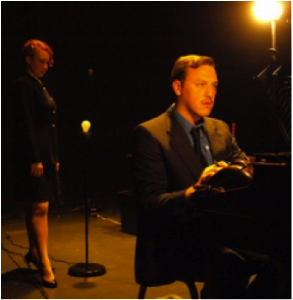 Behind the Curtain Cincinnati | by Rob Bucher

DARKER presented by New Edgecliff Theatre as part of the 2011 Fringe Festival.

In DARKER, film noir meets Fringe and the result is a very stylized and engaging theater experience. All aspects of the production compliment each other, making the final result more than the sum of its parts.

Director Illana Stein creates beautiful stage pictures and fully-realized performances from her cast of four: Michael Carr as Max, Jeffrey K. Miller as Tom, Mindy Heithaus as Lucy and the lighting. I don’t really know how better to describe it. Using several free standing, unshaded light bulbs in various lit combinations throughout the show. the shadows become a fourth presence on stage. Kudos to Melissa Bennett on her lighting design and technical direction.

Back to the breathing cast, in both look and performance, Mindy Heithaus personifies the femme fatale. One more than one occasion I realized she was standing in a “classic” movie pose…I didn’t see her step into it, but suddenly it was there. It’s attention to these kinds of details by everyone involved that elevates the show. Another component to the success of the show is the genre-matching costume and prop design of Jim Stump.

Catie O’Keefe’s script takes the 1940′s Hollywood mystery and turns it on its side. Clues are dropped throughout the show, and if at the end I didn’t have all my questions answered, I have to wonder…Was that the playwrights intention or did I overlooked the answers hidden throughout the show? Either way, I’m fine with that.

There are a couple of minor issues I did want to mention. The use of the tap light does not match the motif for the production. Also I would encourage actors to hold for another beat or two for the blackouts before breaking the scene. 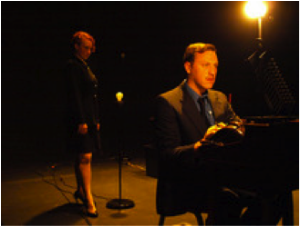 Purely by chance, my Thursday Fringe experience included two shows that seem to be opposite to each other, “Darker,” a presentation by New Edgecliff Theatre, and “Fire and Light,” by Incendium Arts, both local groups.

“Darker” is an eerie love story taking place, ostensibly, in the office of a light bulb factory. Max (Michael Carr) has just come to work there, inadvertently muscling in on the desk of co-worker Tom (Jeffrey K. Miller) at the urging of office manager Lucy (Mindy Heithaus). For a light bulb factory, it is an extremely ill-lit office, and a half-dozen or so bare light bulbs dominate both the set and light designs. It all looks too familiar to Max, however, who questions Lucy and Tom if he has worked there before.

There’s a lot working beneath the surface of “Darker,” a noirish “Twilight Zone” kind of story, and we have to wonder if this is a literal office or a dark place in some other kind of universe. Under the direction of Illana Stein, a former staffer at the Cincinnati Shakespeare Company, the trio of actors keep the action suitably minor key and subdued. It’s an enjoyable puzzle, though without a definitive solution. 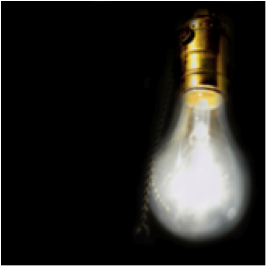 When the end comes it is said that the light fades from your eyes and everything goes dark. That image is the visual put forth from New Edgecliff’s Darker written by Catie O’Keefe. Light and Dark run heavily through this production. Keeping the characters and the audience ‘in the dark’ takes on an additional importance. Love, death, the power of the impending darkness puts a sensual story on stage with a hazy situation where the past is seeping into the present.

The cast of Michael Carr, Mindy Heithaus, and Jeffery Miller are all excellent. They know their characters and show no fear in playing off each other. The set and costumes, designed by Jim Stump, were the best I have seen in Fringe this year. It is risky to have a set and lighting design as elaborate as Darker used, but Stump made it work really well with the limits placed on Fringe productions.

The story was a good concept. It was thought provoking and had strong dialog, but it needs something more. There wasn’t too much to the story as often happens in theatre. This production fits well with being about an hour long. The backstory needs more context. The ending would be more dramatic if the build-up had more basis. As a writer, I love the concept it explores, but the power struggle that goes on between the characters takes more of the focus than the mind blowing resolution of the story.

Overall, the show is a very enjoyable piece, that gives the audience much to see and hear as the light fade.