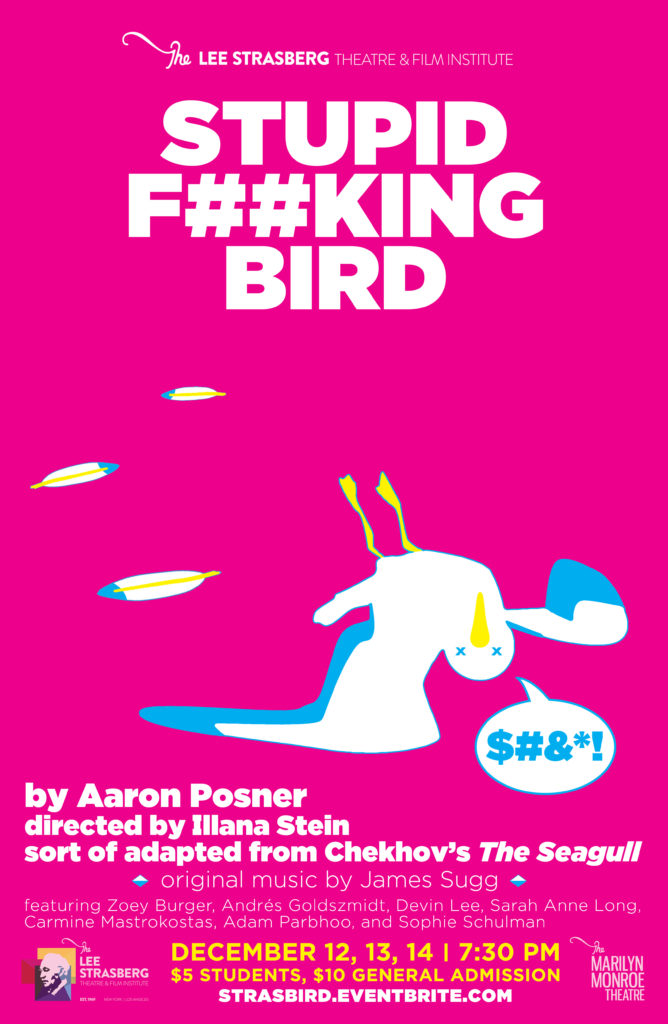 I directed the NYU second-year Tisch students at the Lee Strasberg Theatre & Film Institute in this production over a 6-week rehearsal period.
Production premiered December 12-14, 2019

The biggest challenge of directing Stupid F##king Bird was working with the scenic designer to create a universal set that could work for all 3 acts and still represent transformations in time and location, while not being literal. Having a dock on stage was the first idea we landed on and became the metaphor for the production. The dock was positioned at an angle with the sharp precipice hanging over the stage into the audience, breaking the 4th wall. It was used purposefully when actors were blocked to stand on it to create heightened moments of danger and tension. It also represented Con’s hopes and dreams; it is on the dock that he sees the seagull for the first time. For the Act 2 transition, part of the dock was left onstage to suggest that Con was still holding onto the past. Since most of the action in Act 2 centers around the kitchen in an interior setting, the other ¾ of the dock was flipped over and transformed into a large dining room table. In Act 3, the set needed to represent both interior and exterior spaces. We used curtains from Act 1 to bridge this dynamic and once again involved the dock. By the time we are in Act 3 only Con can stand on the dock. Just as the other characters are avoiding the confrontation with Con, they must also avoid the dock. At the end of the play Con returns to the dock, the place he once saw the pure white bird fly by, as he wrestles with the decision whether he is going to take his own life.