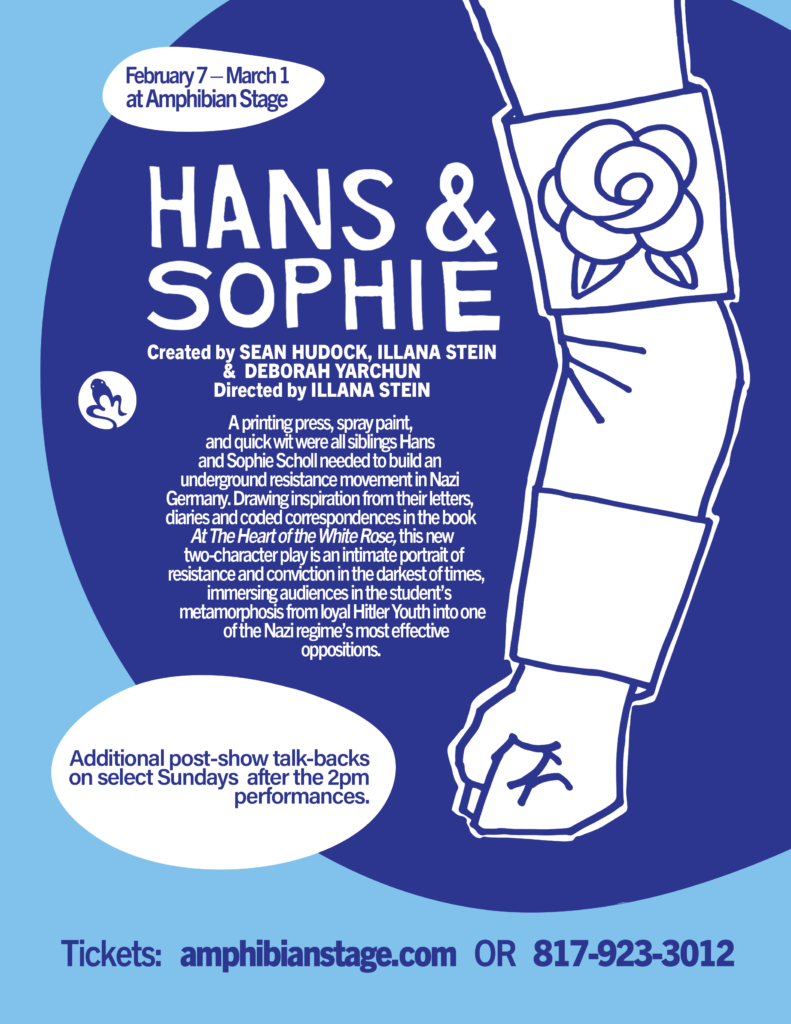 A printing press, paint, and quick wit were all siblings Hans and Sophie Scholl needed to build an underground resistance movement in Nazi Germany. Drawing inspiration from their letters, diaries and coded correspondences in the book At The Heart of the White Rose, this two character play is an intimate portrait of resistance and conviction in the darkest of times, immersing audiences in the student’s metamorphosis from loyal Hitler Youth into one of the Nazi regime’s most feared oppositions.

The challenging part of directing and writing Hans & Sophie was capturing two characters based on real people and sharing their story without creating a static piece of theatre that would feel like a museum piece. We wanted the audience to feel present in the storytelling as they watched the transformation of the siblings go from loyal Hitler youth to founding members of the secret resistance group, The White Rose. The stage was configured in a thrust-like setting with audience seating on all 3 sides. Action of the play extended beyond the traditional playing space of the stage and out into the audience. The actors were blocked to go into the audience, where mailboxes where affixed to seating platforms. Actors ran around the space, skidding by audience members, as they slid around the imagined, icy floor. Actors transformed the set into multiple locations, building the different locations as the play progressed. Additional set pieces appeared from all different corners and within the set itself. The most important element to this immersive production was the preshow where audience entered with bugles blaring and videos playing of the Nuremberg Rally. Hitler with his adoring fans flashed before them. The audience was surrounded on all 3 sides with the imagery projected on the walls. We wanted the audience to be fully immersed in one of Hitler’s rallies, the echoing chants from the cheering crowd reaching its apex before all of the sounds went silent at once and the fog billowed as the play began.