Along with 6 directors, and 30 actors, I was invited to be part of Theatre for a New Audience’s 2017 Actor Director Lab.  We spent 2 weeks in an intense,  hands-on Shakespeare led by Alison Bomber, former head of Voice and Text at the Royal Shakespeare Company. (photos by Greg Kessler) 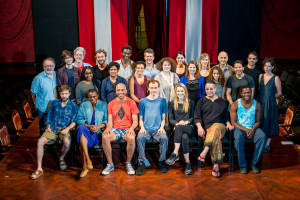 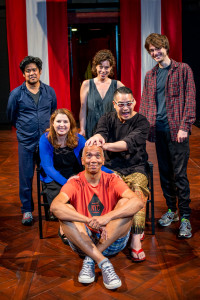 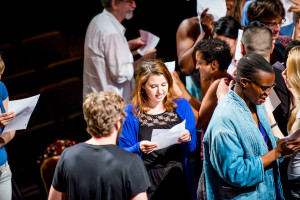 Casting is set for Premiere of A Lost Leonardo

Thrilled to be back directing at Amphibian Stage Productions for a staged reading of Daedalus by playwright David Davalos.  Davalos is most known for his play Wittenberg that played to rave reviews at Amphibian Stage Productions and has been performed Off-Broadway, regionally all over the country as well as an internationally in England, Canada, Australia, and Germany.  The cast for Amphibian’s upcoming reading is made up of local favorite Texas talents and New York actors, including Matt Amendt, Patrick Bynane,  Jay Duffer, Lauren Hayden, Merritt Janson,  and Scott Zenreich.

Rehearsals began for the World Premiere of Naomi Wallace’s play, Night is a Room, at Signature Theatre Company.  Thrilled to be assisting Bill Rauch with a talented cast that includes Dagmara Dominczyk, Ann Dowd, and Bill Heck.    Show Opening is scheduled for November 22.

Casting is underway for the new play by Andrew Harris, The Lady Revealed, which I will be directing a reading at New Dramatist this Spring. Geoffrey Beevers who will be starring opposite of Helen Mirren in The Audience on Broadway is slated for the lead role.  Working with Deborah Brown casting.

Assisting on the reading of Stupid Fucking Bird, at The Pearl Theatre Company, Jan 30-Feb 1.  Directed by Howard Shalwitz.

Stupid Fucking Bird is Aaron Posner’s modern adaptation of Chekhov’s The Seagull and is part of the Pearl’s premiere of the modern classic reading series.

I will be directing Shakespeare’s ‘A Midsummer Night’s Dream’ for the Queens Players.  Performances are scheduled to begin mid October and will go up at The Secret Theater in Long Island City, NY.  More details coming soon!

Next Up: Directing Off-Broadway at The Clurman Theatre, Theater Row

I am directing two plays, ‘Soulmates’ and ‘Dinner with the Wainscotts’ to be performed Off-Broadway at The Clurman Theatre as part of ‘Writopia Lab’s Worldwide Plays Festival’.

Performances are Wednesday, May 8 and Thursday, May 9 at 8 p.m. The Clurman Theatre, Theater Row, 410 West 42nd Street
Reserve your seats here http://www.writopialab.org/worldwide-plays-festival.html